Basophil (好塩基球, Kōenkikyū?) is a minor character in Cells at Work!.

Befitting his enigmatic personality, most of his body is covered, leaving only the area around his eyes visible. Basophil wears a rain jacket over what appears to be a knit cap and a balaclava and carries an umbrella around, likely for protection against stomach acid. What lies behind that mask of his may never be known...

Much like actual basophils, he remains a mysterious figure, often appearing to speak through philosophical and metaphorical language.

Basophil is a type of white blood cell, specifically Basophil. He is capable of triggering the release of histamines when encountering an antigen. He also can allure eosinophils and neutrophils when they are needed. His role is not fully discovered as he always remains mysterious. He is also a type of Granulocyte. 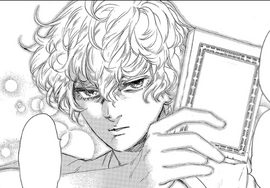 He likes to read poem book on a sampan boat. One day, he's sortied into a battle and vanished since then.

Retrieved from "https://cellsatwork.fandom.com/wiki/Basophil?oldid=6437"
Community content is available under CC-BY-SA unless otherwise noted.