He is a white blood cell, specifically a

Cytotoxic T Lymphocyte (Cytotoxic Thymocyte) that works under the Killer T Division. He is tasked to kill any foreign entities and cells that are damaged or infected.

He becomes a Memory T Cell when fighting the same antigen (Cancer Cell).

He is a tall, masculine cell with tan skin, blond hair, and gold eyes. He wears the killer T cell non-bulletproof vest uniform.

He is later shown with a Memory T Cell hat.

Killer T Cell is loud, obnoxious, and quick-tempered, resulting in rivalries with many cells. He also despises it when a non-white blood cell forms a friendship or relationship with one of his kind.

As an immature thymocyte he went through training at Thymus school, where apprentice cells like himself learn to become Mature Thymocytes. Although in the beginning he was scrawny and weak, he never gave up. There he also met Helper T Cell. They end up forming a grudging friendship.

Killer T Cells are strong cells who play an important role; they kill cancers cells, infected cells as such. 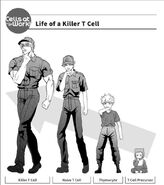 Killer T cell metamorphosis
Add a photo to this gallery

Retrieved from "https://cellsatwork.fandom.com/wiki/Killer_T_Cell_(Squad_Leader)?oldid=5530"
Community content is available under CC-BY-SA unless otherwise noted.