The Story of Cells

The Story of Cells
細胞の話

The Story of Cells (Pilot)

"The Story of Cells" (細胞の話, Saibou no Hanashi?) is the pilot chapter of Cells at Work! . It is a one-shot that was published by the Monthly Shōnen Sirius Magazine, written and illustrated by Akane Shimizu.[1]

The story begins with Helper T Cell announcing the presence of cancer cell activities in the kidney and asking for all immune cells to perform the necessary preparations. However, many immune cells, including Antibody-Producing Cell (B Cell), Killer T Cell and Memory Cell refuse to work with each other.[2] A Red Blood Cell overhears this conversation and wonders about the health of the body until a White Blood Cell asks her for a pen.[3]

Intimidated, she tries not to get involved with him after retrieving her pen,[3] but realizes that they are both headed to the the kidney. The White Blood Cell (No. 1116) warns her about the state of the kidney, so she asks the Red Blood Cell Squad Chief if she could switch shifts with someone else but was declined of her request.[4]

While walking, they help Platelet make a request to the hypothalamus for more calcium ions via hormone secretion using a telephone. They also witness a quarrel involving Mast Cell, Memory Cell, Antibody-Producing Cell, Killer T Cell and Helper T Cell (through a monitor) which leads to an excessive release of histamine by Mast Cell.[5]

Upon arriving at the Renal Corpuscle (followed by Killer T), they find Natural Killer Cell is already at the site.[6] A short while after the situation is briefed by Nephron and RBC delivers her oxygen, Cancer Cell appears and is stabbed by NK Cell but it fails to kill him.[7] WBC asks RBC to run for safety. She comes across Platelet and asks for the phone to contact Helper T Cell and request for assistance against Cancer Cell, but the immune cells declined.

Frustrated, RBC contacts Helper T using Platelet's smartphone to locate the immune cells[8] and bring them to the kidney by force[9]. After almost being attacked by cancer (but protected by WBC), the immune cells apologize to NK and Killer T Cell, who form a temporary truce against cancer. During their fight, Killer T Cell dies an anticlimactic death but White Blood Cell and NK Cell are able to deliver the final blow.

RBC congratulates WBC and invites him to the celebration party. However, he tells her that his lifespan is up and it's time for him to be disposed. She is shocked by the news, since they have just become friends, and asks if she'll ever see him again. She discovers that when white blood cells die, they have to start all over, like being reborn.[10]

She kindly asks him to remember her in his next life, and thanks him for everything. He comforts her by saying he will probably remember her for two more rebirths but it doesn't soothe RBC.[11]

Differences from the current version 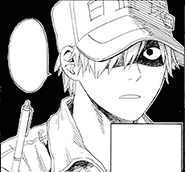 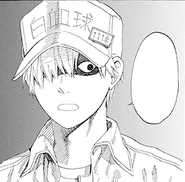 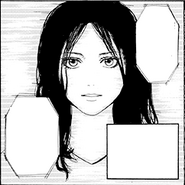 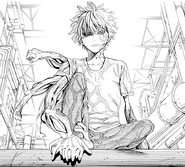 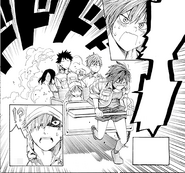 RBC brings the Cells by force

Retrieved from "https://cellsatwork.fandom.com/wiki/The_Story_of_Cells_(Pilot)?oldid=6264"
Community content is available under CC-BY-SA unless otherwise noted.